On 9 October 2018, PLANHEAT and fellow European project City-zen (FP7) jointly organized a HC transition session at the Sustainable Energy Systems Conference in Delft. The session started off with a joint presentation on the main issues in the Netherlands. (Text by Planheat, source: planheat.eu/archives/1308).

Sixty years ago, the discovery of Europe’s largest gas field in the Northern Netherlands initiated a transition from coal, fuel oil, city gas and wood to a nationwide gas network. Within ten years, most houses in the Netherlands were connected to this cheap and (then) comparatively clean source of heat.

This long relationship with natural gas has to come to an end however: limits to available supply, questionable reliability of foreign sources, the Paris Agreements and earthquakes caused by gas extraction have early this year prompted a definitive call to become independent from natural gas (‘van het gas af’). The built environment plays a major role in this but comes with challenges, for example what the expected future demand is and how to deal with the existing building stock, which partially consists of listed buildings.

On the supply side, there are many renewable (local) sources of heat and cold, but their suitability and potential depend on the local characteristics of the urban fabric, and therefore require a different kind of planning. Actual implementation is therefore lagging behind greatly and needs to pick up speed.

Supporting this transition are the results of two European projects: the City-zen methodology dealing with transition pathways, strategic choices and the role of stakeholders, and the PLANHEAT toolkit to assist with transition scenario development.

The panel that followed covered a wide range of stakeholders, scales and ideas. Tjalling de Vries of the Dutch Ministry of Economic Affairs and Climate co-moderated with Andy van den Dobbelsteen, and provided the perspective of the national government. The panel consisted of:

Each panel member was invited to make a five minute pitch, after which there was time for responses from both panel and audience. 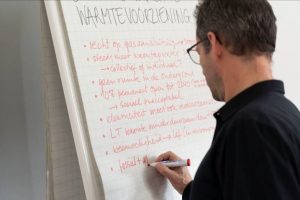 The diverse nature of the panel resulted in a broad discussion on technical topics such as energy carriers (DHC, electricity, hydrogen etc) and scales (local, regional, national), but also on implementation challenges on from economic, societal and ownership perspectives. A few examples: we need more guts, citizen engagement (“don’t make it annoying, make it fun!”) and local champions (every Amsterdam neighbourhood has a volunteer energy coordinator). We need to connect traditional stakeholders with innovators, and find the balance between systems of different scales. We also have large scale solutions (hydrogen and electricity, off shore wind farms) as well as regional and local ones (building insulation, (LT)DH, hydrogen salt cavern storage, exchanging and cascading), transitional strategies (using residual heat), and finally historic examples, both of successful transitions (from horses to cars) and local energy systems (city gas).

The consensus was that even though the challenges are complex and the right answers may differ from place to place, many technical solutions are already available for implementation, and we should start implementing some of them today rather than tomorrow.

We would like to thank our panel members, audience and moderators for contributing to a lively and optimistic discussion. More events are planned for Dutch municipalities. If you’re interested in attending future local events, please contact Dutch PLANHEAT partner TU Delft directly at m.a.fremouw@tudelft.nl.