PV system with storage : an innovative and experimental device in Grenoble

On May 17, a photovoltaic power plant in self consumption was inaugurated on the roofs of the Grenoble’s local energy and climate agency (ALEC). A look back at this innovation with Jérôme Buffière, project manager at the agency.

A few words about the project ?

“This type of installation is both a technical demonstrator and an unprecedented business model. 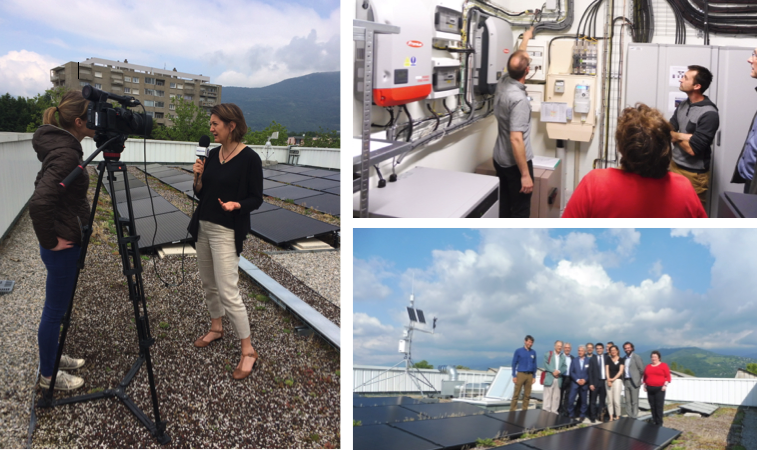 What were the difficulties in carrying out the project and how did you overcome them?

“The challenge was threefold: technical, financial and legal.

The first one was to work with the existing structure of the building while respecting mechanical and waterproofness conditions.  A layout study came to conclusion that 5 rows of 11 modules could be installed on the roof. To limit the mechanical charge, we used an innovative support that allows a seamless integration and that is very light, and made in France!

We also encountered a difficulty to connect to the electrical grid as our project is in a configuration that is not well described and covered by the French regulation. In France, for self-consumption, there are two methods of electricity valorisation: total self-consumption or injection of the electricity surplus. We chose to inject the surplus but the system manager required a second counter, which would have generated additional costs. At last, we are expecting the manager agree to program on the existing counters, at our expense but less expensive than installing a second counter.

Financially, the business case remains challenging as we have encountered insurance costs that are too high in relation to the benefits of the installation, and the low price of conventional electricity sold in France to consumers which undermines the profitability of the project.

According legal issues, it is important to consider several questions to ensure the replicability of such a project : who invests? How to contract for benefits? Connection to the grid ?”

“The test phase has started, several things remain to be improved, notably the business model, but we are sure that this experimentation will open the way to other projects, especially on buildings where power demand fits to a large extend to solar production.”