On the importance of Urban Leadership: Keynote by Joan Fitzgerald

To jumpstart the second day of the City-zen Closing Event, Professor Joan Fitzgerald of Northeastern University delivered a keynote on Urban Leaderhip. In her presentation she drew from her forthcoming book, Greenovation: Urban Leadership on Climate Change (Oxford University Press) in which she argues that cities need to act more urgently in reducing greenhouse gas emissions.  She examined “greenovating” cities in Europe and North America and explored ways for other cities to follow them.

The presentation started with Oslo and London—each wanting to become Europe’s EV capital.  Norway is using oil resources to offer generous subsidies to EV buyers and Oslo is offering incentives such as free parking and access to high occupancy lanes.  Further, Oslo is taking steps to dramatically reduce the number of cars in a large zone of the downtown.  The city is eliminating parking spaces to make more room for bikes. Oslo is partnering with the utility in the Vulkan EV parking garage in which they are figuring out when and how people charge. This is part of a broader strategy to use car batteries to feed power to the grid with the aim to reduce peak loads. Complementarity between national and municipal policy is essential for success, although cities are asking the national government for more control. 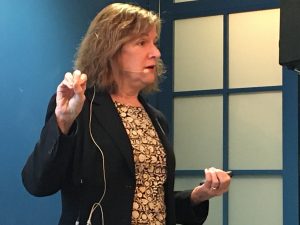 London’s strategy also builds on a zone—in this case, expanding the congestion-pricing zone to an ultra low emission vehicle zone (ULEV). As in Oslo, a big part of what the city is doing is building the charging infrastructure—there’s a chicken and egg problem in that companies don’t want to make the investment in installing charging stations until there is sufficient demand and people don’t want to buy EVs until they see enough charging stations to reduce “range anxiety.” London’s iconic taxis are rapidly converting to electric-hybrids and eventually fully electric vehicles.  And London is testing hydrogen, electric, and hybrid buses to transform its fleet. Fitzgerald noted that contradictory policies are problematic and pointed out that any gains made with reducing traffic through the congestion/ULEV zone vehicle are countered by not having policy to reduce the number of Uber and Lyft vehicles prowling the streets. 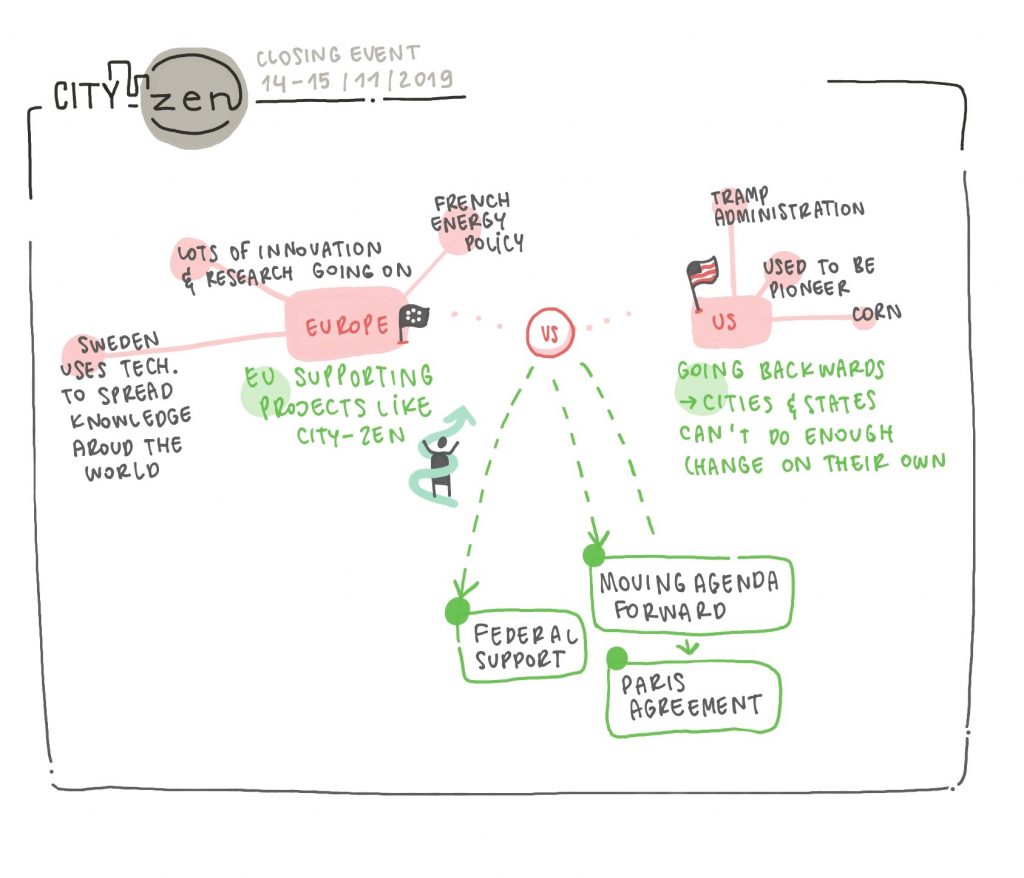 Amsterdam also leads on vehicle electrification.  Fitzgerald pointed to subsidies for taxi drivers serving the airport to purchase Teslas and eventually limiting taxis that can enter Central Station to EVs.  Grocery stores are already delivering with electric vehicles and soon only electric delivery vehicles will be allowed in the busiest parts of the city. As in Oslo, the city is working with utilities to figure out vehicle-to-grid integration.

As to buildings, Fitzgerald argued that if cities aren’t using passive house or zero-net emissions as building standards, they’re behind.  She cited examples of passive house standard being successfully used for new low-income (social housing) in the U.S. and the Dutch Energiesprong initiative that is retrofitting existing social housing to the standard. The Dutch approach is being replicated in New York—showing how policy learning takes place. The next step, she proposed, is for cities to prohibit fossil fuel use in buildings. She cited Boulder (Colorado) and New York City as two places that are moving in that direction. 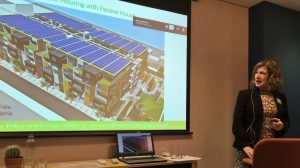 Fitzgerald focused on cities in the U.S. to inform the audience of best practices there, but also held that many European cities are far ahead of American cities. She pointed to their boldness in gradually de-prioritizing cars and their associated parking on city streets—Oslo, Paris, Berlin—are just a few examples.  That is a much more difficult step to take in the U.S. where there is a stronger car culture.  She pointed to cities such as Malmö, Stockholm, and Copenhagen, which are experimenting at the district scale to integrate all aspects of their climate agenda—from green buildings, green stormwater management, district energy, renewable energy, public transit, and electric vehicles, to social and educational programs to support a green transition. 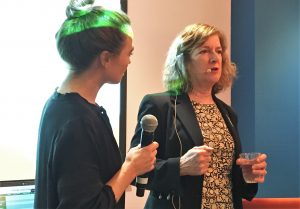 While the European Union issues mandates that moves member states and their cities toward increasingly aggressive green building standards, adoption of renewable and district-scale energy and electrification of transportation, the U.S. president is taking the country out of the Paris agreement and using executive power to gut existing environmental protections.  U.S. cities and states attempting to move the climate agenda forward will have a much tougher time than their European counterparts.  A positive note, indeed, for all those involved in the City-zen projects – especially those who have been dealing with barriers such as outdated legislation. Europe is moving in the right direction!