The concerted development zone of Flaubert

The Flaubert Concerted Development Zone (CCA) was voted on February 27, 2012 but was subject to reorientation in 2015. This is an eco-neighbourhood project that is part of the dynamic launched by the Eco-neighbourhood of Bonne and the EcoCité project in the northwest of the city. This project involves the City of Grenoble and the Metro through their respective competences in urban development, energy and environmental protection and housing policy. Its landscape design was entrusted to the developer SAGES and the project management to the Ateliers Lion Associés and Aktis Architecture et Urbanisme.

The scope of the ZAC will be 93 hectares, divided into 181,500 m² of housing (2400 m²), 34,500 m² of offices and 28,000 m² of activities, the production of which will be spread over some 20 years. This urban project proposes several major operations, including the Flaubert Park delivered in 2015, the construction of a sixteen classroom school and the creation of a residential facility for dependent elderly people (Ephad). The objective is also to connect this district to the rest of the city and more particularly to the city centre (bicycle path and tramway).

Concerning the sustainable aspect, the district will allow the development of nature in the city thanks to the green flow which will be partly transformed into an urban park and thanks to the greening of the built blocks. We can also mention the choice of materials that will be of particular importance to the SAGES, with the use of wood and earth, for which the prototype of the “Terra Nostra” habitat located in the ZAC is the ambassador.

The urban heating network in Grenoble

The Grenoble heating network is the largest in France in terms of kilometres with 170 km of pipes supplying the equivalent of more than 92,000 homes (2014 figures). Now owned by the Metropolis, the latter delegates management, maintenance and development to the Compagnie de Chauffage (CCIAG). It was created in 1960 and expanded several times. It was formed from several networks with different energy sources and merged into a single grid in the 1970s, making it a unique case in France.

The network uses 6 different energy sources: household waste (36%), coal (25%), wood (23%), gas (8%), fuel oil (6%) and animal meal (2%), produced in 9 different sites (Metro 2017 figures). Since the extension of the RCU with the Flaubert ZAC low-pressure heating network, a seventh energy, solar energy, can be added, although it contributes very little to the network as a whole. In total, the network uses 61% renewable energy in 2016 (earning it the “Eco-grid” label) and the objective set by Grenoble-Alpes Métropole is 100% by 2050.

The district heating network works as follows: by burning these energies, water is heated locally in the production sites. It is then sent into the network to the connected buildings. Finally, it arrives in the radiators and connected toilets. Today, the public heating network serves 7 municipalities: Grenoble, Echirolles, Eybens, Pont-de-Claix, La Tronche, Gières and Saint-Martin-d’Hères.

Over the period 2012-2013, the network has gained 2.6km in length, with the connection of the Centre Départemental de Santé de Grenoble, the Musée Géo-Charles d’Echirolles, and the Clinique Belledonne de Saint-Martin-d’Hères, among others. He earns on average 2 to 4 MwH per year. The latest extension is that of the low-pressure network on the north islet of the Flaubert ZAC.

The project to extend the heating network

The project to extend the low-pressure heating network (72°C) is unique because of its innovative coupling of four systems: solar thermal production, heat storage by phase change material at the substation level, a low-temperature heating network and intelligent heat flow management. It will connect 355 housing units and 11,000m² of business space. This is a demonstration project whose objective is to test innovative solutions on a real network. The expected benefits are a smoothing of network power demands (MCP storage, piloting), a lowering of temperature regimes (piloting) and an increase in the use of renewable and recovery energies through the use of solar energy.

It is the SEML CCIAG which is responsible for the construction and operation of this network. This is a public service mission that is part of the delegation of the public district heating service with Grenoble-Alpes Métropole and was due to end on 30 June 2018 (see note for information).

The CCIAG is involved, with the City of Grenoble and the Metro, in the City-zen and EcoCité2 projects with Flaubert as operational land, respectively Ilot Nord/Z3/Z5 (City-zen) and Flaubert EST (Ecocité2). The project forms a whole and must be operational within the time limits set in order to benefit from the European and national grants governed by these two projects. Indeed, obtaining subsidies requires the demonstration of the performance of the subsidised prototype project as a whole: the installations eligible for the City-zen and EcoCité projects are therefore interdependent in their implementation time and execution. In addition, these funds allow the technical viability of the project and its economic balance to be assessed, which means that its profitability is not certain and that, in fact, it will not generate any income. Like the geothermal project on the Peninsula, this project was chosen as part of City-zen because it is innovative, affordable financially and above all replicable.

The project operates as follows: the low-pressure heating network is connected to the district heating network in Grenoble. The high-pressure network is routed to the Salammbô building substation (Z3 A1), which has an HP-LP exchange. Solar energy is produced using photovoltaic panels located on the roof of the Bifurk a few metres from the Salammbô building and is injected directly into the heating network before being fed into the exchanger. In the Salammbô substation is also located a phase change material (PCM) storage module that allows centralized heat storage and that has been conceptualized and sized by the CEA. Thanks to the HP-BP exchanger, the water circulating in the pipes passes from a temperature of 47°C to 72°C and is distributed via the new low-pressure network to the buildings in the district. The first phase of the project (see planning) provides for a connection exclusively for the buildings on the Marceline block, i.e. more than 300 housing units in total. Finally, this network benefits from an optimized energy management platform that manages energy production, distribution and demand. 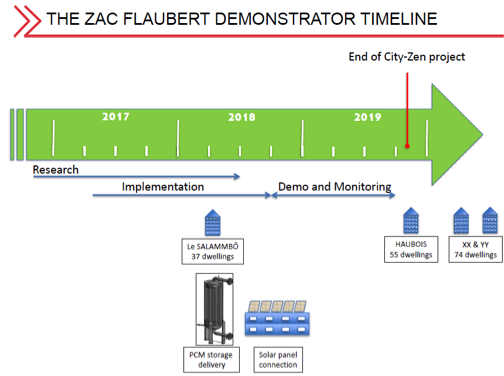 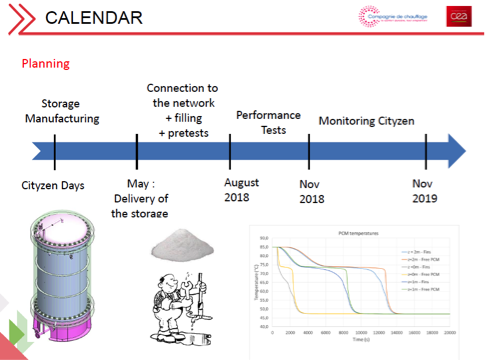 This installation allows solar energy to be injected into the heating network to increase the rate of renewable energy on this network. It is located on the roof of the Bifurk, a former industrial wasteland that has been rehabilitated as a cultural and associative site. Built and financed by the CCIAG, the plant is a public property that returns to the metropolis at the end of the concession. It consists of 200m² of solar panels that produce approximately 100 MWh for an annual solar coverage of about 5%.

The purpose of this installation is to provide heat to the Flaubert Zone hot water loop by heating the loop returns before passing through the HP exchanger. At the level of the solar circuit (solar primary), a circulation pump will ensure irrigation in the collectors. The solar hydraulic module (including the primary pump) will be installed in the Bifurk’s boiler room. The primary pump will be switched on when the temperature in the sensors is higher than the network return temperature. At the unmarked substation (solar secondary), a circulation pump will transfer the heat recovered by the solar installation to the heating network. A heat exchanger is installed between the solar circuit, glycolated, and the secondary circuit (water from the network).

If the temperature at the output of the solar collectors is higher than a maximum set point (higher than the network flow temperature) then part of the heat will be discharged into an air cooler. The plant allows a solar coverage rate of 5% thanks to a useful solar production (injected into the grid) estimated at 95.5 MWh/year for a Gross solar production (collector output) of 139.9 MWh/year, i.e. an overall yield of 68%. The solar thermal power plant is an integral part of an experimental project for the intelligent management of heat supply for new buildings. Alongside storage and energy management systems, this intermittent heat source will produce energy that can be stored in order to be returned at the right time to users.

One of the objectives of this installation consists in determining, through experimentation, according to collector technologies and network temperature levels, the relative performances of centralized and storable solar production (solar coupling and storage) and decentralized and shared solar production (smart-grid type challenge). This will maximize the rate of use of the solar resource, and optimize the required investments. Solar thermal energy is therefore one of the structural elements of this innovative low-temperature network.

In the Salammbô building substation there is a daily heat storage with phase change material for the clipping of the power demand of the buildings in the area. This device, designed by the CEA, aims at a storage density twice as efficient as water over the temperature range of the Flaubert network, and allows to dephase 10% of the needs thanks to a storage that supplies the daily peaks (clipping of 20% of the power demands). It consists of a balloon 1m40 in diameter by 3m80 in height,

This device is coupled with the solar energy produced by the solar power plant installed on the roof of the Bifurk to manage intermittences. Storage loads and discharges will be controlled by the intelligent management system. The expected operating modes are in summer, storage of the solar energy produced and in winter, peak peak capping (in the case of peak consumption). The load is supplied at night by the waste incineration plant but also during the day, in summer, by solar energy. Discharge occurs in the morning and sometimes in the late afternoon during peak consumption periods.

The storage can be fully charged in a time varying from 3 to 8 hours depending on the availability of ENR sources, for 3 hours of discharge related to the peak power usually required by a substation. The storage has a capacity of 120kW.h and a constant power of 40kW.

The phase change consists in melting and resolidifying the material used (a material of the fatty alcohol family), which allows a much more compact storage. Space saving is then one of the major advantages of this installation and one of the justifications for its use. There is currently no data on the cycling of this type of material or the performance of such storage in real operation. The demonstration project will thus provide information on the cycling of the material and the exchanger, as well as the performance achieved in terms of power.

The low-pressure heating network will benefit from intelligent control that decides on temperature setpoints and optimal use of equipment (PCM and solar energy), which will allow the heating circuits to be relieved. This monitoring thus consists in an optimal use of the resources circulating in the network according to demand and a forecast of sunshine. 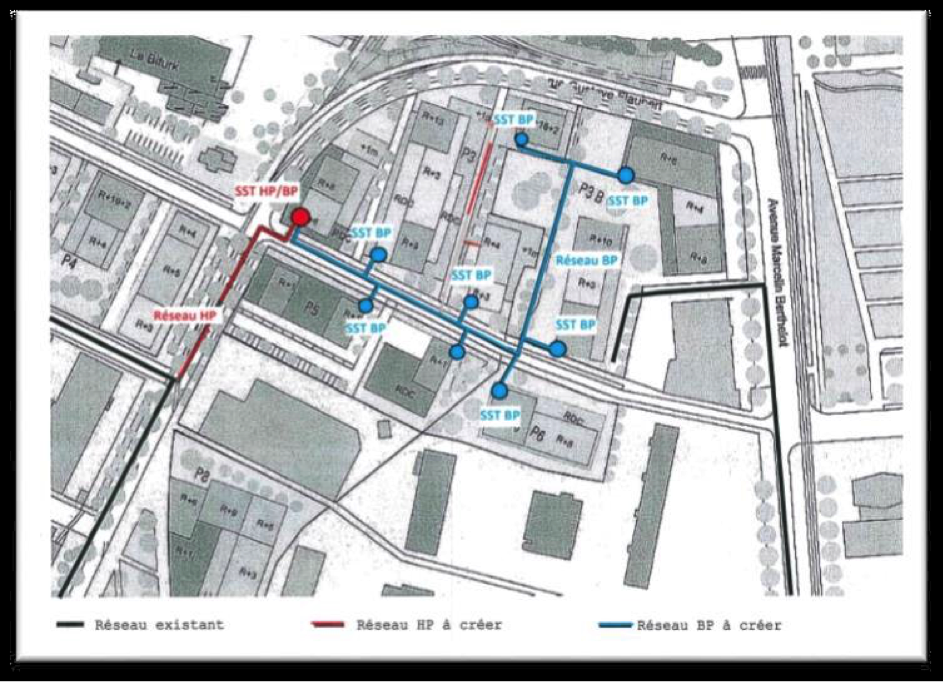