The roadshow is coming to town… and bringing good news for a sustainable future.

What will life be like in your city the coming decades?

After Amsterdam, Belfast, Izmir, Dubrovnik, Menorca and Roeselare, … UK Preston citizens were invited in the week of November 12 in the frame of the EU funded City-zen project to co-create on the future of their City. Together with city inhabitants, local businesses and council members, the roadshow expert team envisions a sustainable future for the city, brilliantly combining technical decarbonization solutions with stunning architectural and urban design proposals to offer augmented quality of life.

[Curious about some of the tangible outcomes of the roadshow, read the bullets below this article]

The relevance of these sustainability targets is clearly proclaimed on the introduction day of the roadshow by Head of the School of Natural a Built Environment in Queens, Belfast, Professor Greg Keeffe;

“In the UK we need a factor 4 reduction in our environmental impact if we are to get anywhere near to our earth share and probably a factor 5 to allow for population increase.”

This overclouded current reality sets the tone and urges for sustainability action.

“But will this green action not put a damper on the future; restricting the comfortable life we were used to?”, the Prestonian might think. No, after all the transition to a sustainable future brings a bright new alternative with augmented quality of life. UCLan professor Craig Lee Martin who coordinates the roadshows, puts it this way in his contribution to the introduction session;

“Sustainability is not about losing, it is about what you gain. Replacing it with something better for your children and community.” 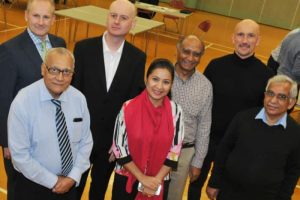 The local citizens have huge impact from the very beginning onwards in the co-creating process. Unlike Google, the roadshow team tries to find out what the questions are before giving answers.

Will it be a healthy and pleasant environment to live and work, presenting itself as an attractive centre for the wider area? What should for sure be altered in the next scheme of city improvements?

To get some tangible answers to these questions and many more, citizens bring in indispensable ideas and information about local context into the design process to create a sustainable city.

To crystalize their ideas, dreams and realism, the expert guidance of the roadshow team was there to guide them for an entire week. Indeed, city transition to a sustainable future works when people living in it carry the vision for it.

To get a grasp of the process and the different actors involved in the energy transition of a city, the roadies even brought in a game, be it a serious one. In the game GO2ZERO participants take up the role of local government, network planner or any of the other acting parties involved in city energy planning. By doing so they get to experience the consequences of decisions in the transition towards a zero-energy city.

This role-playing game clearly showed the complexity of the transition and the different incentives of the various stakeholders in the energy planning of a city. Looking for an overall sustainability goal, one could easily end up getting disappointed by the hidden agendas of several stakeholders around the table. One can imagine the huge sustainability challenges we face on a global scale. 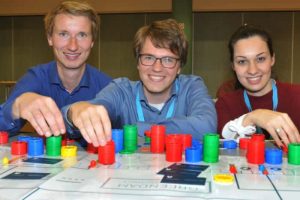 In the Broadgate district of Preston, the carbon footprint of an average household is 7 tons of CO2 equivalents, corresponding with 1,3 football fields of forestland. Pac-Man (of who we now know dr. Riccardo Pulselli is the true identity) dropped by to chase carbon footprint to an amount that can be nicely offset by a forest area the size of a small city park rather than taking respectable share of the county. How does Pac-Man work? The true name of the Pac-Man game is carbon accounting; he first translates energy use, mobility, waste, water and food consumption of the citizens into an environmental footprint expressed as tons of CO2 equivalents. This is then translated to the forest size needed to offset these CO2 emissions. Consequently, he repeats this after implementation of the roadshow solutions to decarbonize the city. Then Pac-Man is released to indulge in eating all the forest area that represents the gains in carbon footprint. Njamnjam for a better future!

For the Broadgate district Pac-Man had to face about 800ha of forestland corresponding with a carbon footprint offset of 10.500 tons of CO2 equivalents per year. That’s right, Broadgate currently needs forestland 20 times (about 800ha) the size of the district (about 40ha) to offset its current consumption levels and even 30 times when additionally accounting for food of a meaty diet. Pac-Man did not have to leave hungry. He only needed to leave 23ha of urban city forestry for carbon footprint offset leaving the city fully decarbonized after roadshow measures are implemented.

Ingredients for a carbon lean future

Two weeks before the roadshow expert team shows up, the SWAT studio student team of TU Delft start preparing a diversity of sustainable solutions by low energy architectural and urban designs. From professors a strong motivation and professional attitude is business as usual, but these students were hard to compete with. The drive and enthusiasm they displayed during the roadshow was clearly translated into their contributions for the designs of Preston districts Broadgate, UCLan university campus, the waterways, Fishergate and the station area. The City-zen roadshow team of experts joined them in the middle of community centers to work intensively on solutions for the city transformation towards a zero-carbon future. City urban design, buildings, mobility, waste management, water and even food consumption levels were put to the test and mitigated to a skinny environmental footprint.

Architectural and urban design proposals were presented to inspire inhabitants and local policy makers to take the next steps in the transition of Preston to a sustainable future. Broadgate was chosen as a demonstrator district to show decarbonization potential by deep renovation of buildings and hooking them up to district heating and local renewable energy production. Some of the tangible outcomes of the roadshow;

These are just some of the solutions proposed by the Roadshow team. Do you want to know more about the Roadshow’s vision for Preston? Download the City Vision