For the last ten years, France has encouraged the creation of small to medium sized PV systems with feed-in tariffs, where all the PV production is injected to the grid and sold to an electricity supplier. But today, people are more and more eager to consume what is locally produced, and this trend has finally caught the photovoltaic market, where the word “self-consumption” is a standard now.

The overall growth of self-consumption in PV systems was so fast, that no studies have been performed to analyse the legal and technical context in France, nor the benefits for the owner and the community. A PV System with storage on an office building in Grenoble has thus been built and analysed in the City-zen framework in order to remedy this lack of information.

A PV plant with storage : A battery for what ?

The system is a 16.5 kWp PV plant with a 4.5kWh (3.6 kWh usable) lithium-ion battery connected to one of the two inverters. During the feasibility study, several objectives were identified for the battery: maximizing the PV self-consumption, reducing the building contracted power and providing service to the grid by reducing network consumption peak for example. Different control strategies were set-up and tried in order to see if they would enable the different goals achievement.

The system is controlled and monitored with several tools and platforms: some are used for the control of the battery in real time and other for the monitoring of the system in the long run. The system was commissioned in January 2018, but data transmission was only finalized in July 2018. Besides, the first data received pointed out a dysfunction of the battery, as it was alternating charge and discharge phases in the evening and not running at all on the daytime when it would have been necessary. The problem was finally solved in the end of November 2018, letting the battery with a shorter lifetime because of the almost 500 full-cycles (on the 8 000 expected according to the manufacturer) performed by the battery during those eleven first months of operation.

In the end, both the PV system and the battery performed as expected during the design phase: there is even a slight over-performance of the PV plant during the monitored period.

What are the results?

In the end, the reduction of the building contracted power seems almost impossible given the current system control tool, with moreover only a small added value for the plant owner and the Distribution System Operator (DSO). The procurement of grid services, as for example the reduction of the peak consumption from the local grid, is also difficult to achieve: it would need a regular update of the battery strategy (daily or weekly depending on the DSO demands) following an operational plan provided by the DSO: is the small profit (given the battery small size) worth the manual work?  In the other hand, maximization of the self-consumption is the natural goal for this kind of small battery coupled with PV system, and battery control set-up has been done to facilitate its achievement. After one year of functional operation of the PV and battery system, the recorded self-consumption rate is of 86%, and the self-production rate of 25%: both figures are above the expectation. 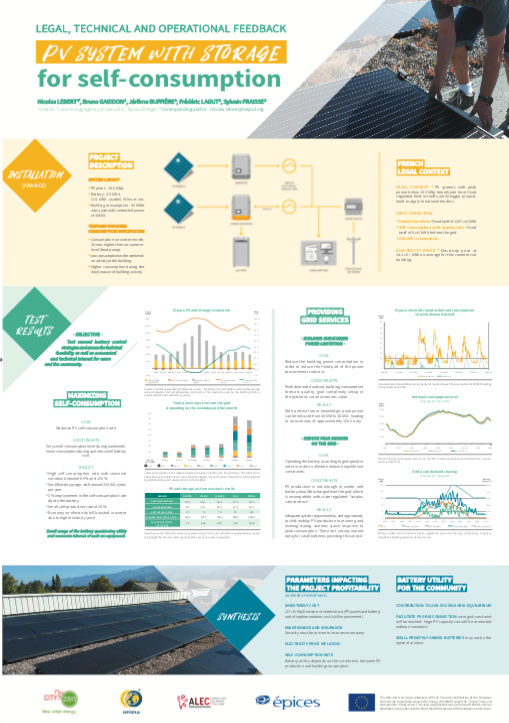 What developments for a replication?

The final question is: is this kind of project profitable for the owner and the community, and is it replicable? The answer to the first question is yes, but with this pilot system characteristic, economic profitability is low and battery usage small (leading to a small gain for the owner and the community). This project is however replicable, and the following aspects (in order of importance) can facilitate this replication: decrease in the system price, decrease in the insurance fees, self-consumption rate gain due to the battery (the less correlated the PV production and the consumption, the bigger the interest for a battery), electricity price inflation (the higher the electricity price the bigger the gain for self-consumed kWh).